Since I was young, I’ve been interested in computers. And the best part about what I’ve done over the years is that I still have a record of most of it! Below is a not-necessarily-exhaustive list of all of the tangible projects I’ve designed so far, in reverse chronological order:

As part of my graduate-level Machine Learning (CS 7641) class at Georgia Tech, I, along with my highly skilled team members, experimented with a variety of cutting-edge machine learning techniques. Our goal was to use generative machine learning models to create novel and unique art from a dataset of artwork.

To the left is an example of one of the techniques we experimented with; it shows an example of Neural Style Transfer. More specifically, it shows the result of using Vincent Van Gogh’s Autumn 1887 Self-Portrait as our content source and Edvard Munch’s The Scream as our style source.

If you’d like to see the full final report for our project, please feel free to check it out at https://jakepresent.github.io/.

As part of my Computer Organization and Programming (CS 2110) class at Georgia Tech, I created a Game Boy game, written entirely in C. I decided to make a version of Space Invaders, which I mistakenly thought was called Galaga until after completing the project. I still think it turned out alright, though!

A screenshot of the game is to the right. If you want to check it out, you can click here to download the game file, which should run on any Game Boy emulator. Source code here. 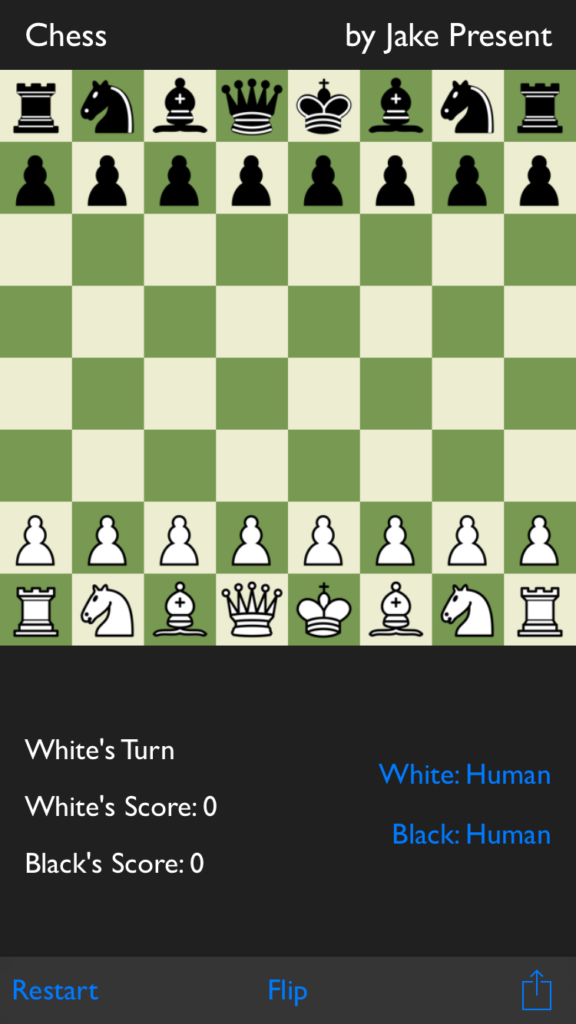 During high school, the final project for my AP Computer Science class was to make a board game with three levels of “AI” in Java. In other words, you had to be able to play against the computer and select the difficulty.

Under these guidelines, I chose to make chess. The final Java program I submitted can be found here. The following summer, however, I found myself with a lot of free time, so I decided to use it as an opportunity to learn more about programming.

As such, I took it upon myself to port my chess game to as many platforms as possible, starting with .NET. (link here)

Then, I ported it to iOS, using Swift. This is the version pictured on the right of this page. I published it on the iOS App Store, and it’s still there at this link.

I also published my app on the Google Play Store for Android devices, and you can check that out here.

In high school, I wrote a bunch of music with the online music notation software, Noteflight. You can listen to it in all of its MIDI glory right here. Listed in order of composition.